We as Indians should be so very awfully ashamed that the grieving mother of our late Nirbhaya has been solitarily and by herself vociferously struggling for so long to ensure that those four brutal accused who mercilessly gang raped and murdered her daughter in 2012 face the rule of law. Let us commend all those Advocates in Delhi who stood by this brave mother.

Despite the highest Court in the country having confirmed the death sentence for this so very heinous crime, the accused have been merrily filing applications all over and that too one by one, as a deliberate well calculated move to delay and derail the due process of law. Convicts must not be allowed to enjoy exploiting the process of law or defeating the judicial system in the country. The law cannot be allowed to be an Ass.

All this misuse of the Judiciary and precious scant Court time is absolutely impermissible. May be, it’s high time the government amends the law to ensure that punishment for such grievous crimes should be extremely fair but yet very swift. The law must serve as a deterrent to lawbreakers and not a safe haven for such brutal crimes.

Will it take the child of a ruling politician to be raped and murdered for the Government to awaken to this reality that Justice delayed is Justice denied? This ghastly incident stunned the nation and the world who demanded that justice must be done and be seen to be done quickly. Seven years have now gone by and the convicts are still playing with the machinery of the judicial system. The convicts and the system are still trying the patience of the nation who will stop believing in the justice system, the credibility of the institution and its own power to execute the death sentence.  A system that fails to punish, in the end associates itself with the criminal.

Let all our very sincere prayers and good wishes be with our departed defenseless Nirbhaya and may her dear mother’s relentless efforts finally bear that fruit she so desires. May that long delayed Justice be finally done. 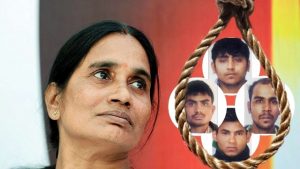 MAY NIRBHAYA’S DEATH NOT BE IN VAIN – Aires Rodrigues