While Narendra Modi has only been jetting around the world,  his  ministers alike the boss have been a overall disaster. It has been only loud hollow talk with no delivery. On Defence Minister Manohar Parrikar jaded and skewed performance less said the better. All indications are that he may soon be axed from the Union cabinet. However some of the Ministers who have excelled include Railway Minister Suresh Prabhu and Coal Minister Piyush Goyal.

Suresh Prabhu who is no stranger to Goa is the son-in-law of Ribandar’s outstanding illustrious son the late Dr Sanvlo Keni whose contribution to the socio-cultural field was enormous. We are now proud that Ribandar’s son-in-law Suresh Prabhu too is doing extremely well.

Over the years the Indian Railways has been improving but there is a lot of room for further enhancement in service especially in rural India. As India’s Aam Aadmi is at the mercy of the public transport, they are entitled to a good and dependable service. We can expect Suresh Prabhu to infuse and steer in that much required change by making travel by rail a pleasant one. Suresh Prabhu has the charisma, potential and conviction to usher in that much needed Parivartan in the Indian Railways. 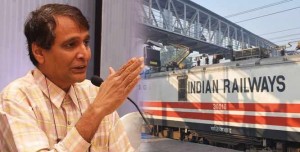 One thought on “UNION RAILWAY MINISTER SURESH PRABHU AND RIBANDAR”