It is so very distressing that our Ribandar residents are still grappling with the now awful roads that were recklessly dug up last year and continue to be unattended to. It will soon be another monsoon while we are at the mercy of roads which are in a very precarious state and so accident prone. And now the local MLA Babush Monseratte cannot resolve this arduous issue while our sinking Panaji and Ribandar lingers in utter dumps.

As always people are used and abused as pawns by the very politicians they vote for and depend on for ensuring that their best interests are protected. However, through rampant corruption, broken false promises, willful neglect and incompetence everyone suffers from a degradation of the infrastructure, poor planning and a destruction of the environment from sewage pollution, lack of garbage treatment facilities and pathetic roads.

Pre-election, the current Panaji MLA made many false promises including that Casinos would be removed from the River Mandovi within 100 days and many more, only to be all broken.  Perhaps he did not have enough time as his only focus after assuming office was to saffronise himself, feather his own nest and shamelessly jump ship betraying the trust of the people and worsening the desperate issues they suffer from. Something which he and the other nine parasites who overnight saffronised themselves will never be forgiven. People feel betrayed that yet again they are being left high and dry and left to suffer the neglect of the dilapidated infrastructure and environment and arrogance of an uncaring MLA and Government.

The stench from sewage and garbage is sometimes more bearable than the stink of unacceptable neglect and corruption that flows from those in Power. 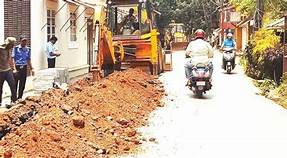 IF OUR HORRIFYING RIBANDAR ROADS CANNOT BE TARRED, AT LEAST A COAT OF COWDUNG WOULD BE OF SOME RELIEF – Aires Rodrigues