The eccentric and erratic Defence Minister Manohar Parrikar has been unduly and very unfairly targeting NGO’s and activists.  While probing the funding of NGO’s, we should first be informed as to how Manohar Parrikar, some of his cronies and the BJP in Goa has grown so wealthy over the last four years.

While as Opposition leader Manohar Parrikar used all the activists and NGOs to rake up all sorts of issues against the then government but turned his back on them all on deceitfully usurping power in March 2012 after making all those false and fake promises.

As Leader of Opposition Manohar Parrikar had protested on almost any and every issue. He was at all public protests and even forcibly blocked major roads and even the Highways. After becoming Chief Minister the double faced Manohar Parrikar has displayed Zero tolerance to any sort of protest or agitation while wanting everyone to be at their best behavior and remain mere silent spectatators to the BJP’s rampant corruption and bad governance. 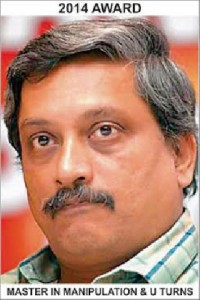 MANOHAR PARRIKAR A MASTER IN MANIPULATION AND U TURNS – Aires Rodrigues