In yet another farce in this current power play in Goa, the power starved Babush Monseratte has made yet another U turn and has decided to contest from St Cruz Constituency after directing the current MLA and his yes-man Tony Fernandes (Congress) to resign.

Babush Monseratte will contest on a BJP ticket and will support Manohar Parrikar in Panaji. Jennifer Monseratte is also all set to resign and contest from Taleigao on a BJP ticket while Vishwajeet Rane will also switch to the wilted Lotus in Valpoi.

Manohar Parrikar, Babush Monseratte, Jennifer Monseratte and Vishwajeet Rane may have reached this very unprincipled and nauseating deal. But the people of Goa who have been watching with deep anguish and despair the very sordid developments over the last two weeks will have the last say.

Ironically Vijay Sardesai, Rohan Khaunte, Vishwajeet Rane and Babush Monseratte on March 12th last year had addressed a joint press conference announcing their alliance to expose and defeat the BJP. But now they will all be Ministers in the BJP government they had repeatedly accused to be communal and corrupt.

As a first step towards ending this rotten political prostitution, Goans would have to stand united and resoundingly defeat Manohar Parrikar, Babush Monseratte, Jennifer Monseratte and Vishwajeet Rane at these crucial Assembly by-elections that will probably be held in May.

We need to send a very clear and decisive message to these political scoundrels that enough is enough and that the people of Goa will now be in command. 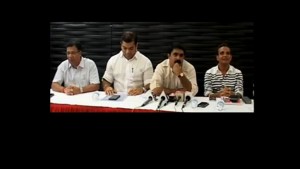