The very embarrassed Election commission officials in Goa need to hang their heads in shame to the glaring faltering of the EVMs and VVPATs at the elections held in the State on 23rd of April. Goa’s Chief Electoral Officer Kunal was responsible for ensuring that a system would be in place that allowed people to exercise their most precious right of all, the right to vote in a free and fair election, free of fraud and intimidation. In the world’s largest democracy, with a technological edge superior to many other countries, the Election Commission failed the people of Goa and not lived up to Mr. Kunal’s bragging for over a month that meticulous steps had been taken to ensure that the EVMs and the election process would be flawless.

On the contrary, many EVMs and VVPATSs were found to be faulty, maliciously defaulting votes only to the BJP regardless of the individual vote cast and had to be replaced. Hundreds of frustrated and angry people went home having been denied their right to vote I despite giving up their precious time to do so.

It is so dismaying that despite crores of tax payers’money being spent on this election, the people’s faith in the election process has been shaken beyond repair. The Judiciary needed to step in and order a probe as to how those EVMs and VVPATs faulted bringing utter disgrace to the election process.

It is no secret that under Narendra Modi, the Independence and sanctity of the Election Commission of India has been compromised and it represents yet another trick of the corrupt BJP to prevent a fair campaign, rig the election and distort the results. If the EVM’s are not 100% secure, we should return to the ballot paper like all major democracies around the world.

It is well known that EVMs can be manipulated, hacked or malfunction for technical reasons. Elections in a democracy are meaningless and a futile process unless they are free, fair and absolutely transparent reflecting the wishes of the people and not the corrupt actions of a government or party in Power.

Organising free and fair elections is sacrosanct and more important than the result itself. If the reports are true that the flaws with the EVM machines were defaulting the votes to the BJP regardless of the choice made, then the results announced on the 23 May will be of questionable legitimacy and people will be understandably aggrieved that they may have been denied or robbed of their right and desired outcome! 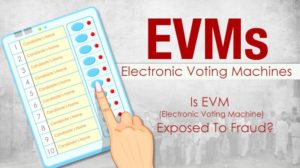