Former Chief Minister and Goa’s longest serving MLA Pratapsingh Raoji Rane towards the twilight of his long political innings is rightly receiving the flak and being virtually roasted on social media by Goans across the world for that very bizarre statement on 3rd August in the Goa Legislative Assembly demeaning Goans working overseas.

But equally culpable in all this are those 35 other MLAs for the indefensible insensitivity they all displayed while they were seated in the Legislative Assembly that evening and none of them had the spine to object to Pratapsingh Rane’s uncalled for tirade against Goans working abroad. In fact some of the BJP MLAs were seen cheering Pratapsingh Rane while he was senselessly uttering those crude comments.

It was incumbent upon Chief Minister Manohar Parrikar as the Leader of the House to have stepped in and upheld the dignity of Goans by stopping Pratapsingh Rane’s outburst against innocent Goans. The inexplicable stoic silence by Speaker Pramod Sawant is also condemnable as he should have strongly reprimanded Pratpsingh Rane besides expunging those insane words uttered by him.

This government which has been claiming that it stands for Goem, Goenkar and Goenkarponn stood exposed once again on 3rd August as it remained a mere silent spectator while Pratapsingh Rane merrily hit the last nail on it.

Over the last week while the Goan diaspora is rightly enraged, the now invisible Pratapsingh Rane and his son Vishwajit have been mute as mice.

Do they have to be told that ‘Silence is not always Golden?’ Martin Luther King Jr. had said “Our lives begin to end the day we become silent about things that matter” 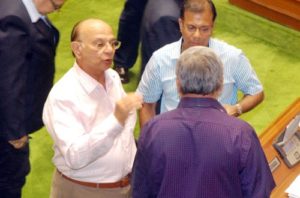 END OF THE ROAD FOR PRATAPSINGH RANE – Aires Rodrigues