Today 14th March the coalition Goa government led by Chief Minister Manohar Parrikar completes a year in office. Politicians and Political parties who were ideologically poles apart from the BJP prior to the 2017 Assembly elections, suddenly within hours of the results being declared on March 11th all jumped and congregated on the same bed without caring that Goa was being further screwed.  Manohar Parrikar shrewdly maneuvered and manipulated every trick under his sleeve to usurp the Chief Minister’s chair. The formation of the coalition was not for the sake of Goa but selfishly to share Power and the spoils of office.

To assuage the then public resentment and outrage over this current unholy alliance, the people of Goa were hoodwinked by promising a Common Minimum Programme (CMP) which would guide and gear the functioning of this motley cabinet.

But as was expected it has been a year of confusion, contradictions and controversies. This may sound like a eulogy but it is factually the ground reality. While assuming office this government by way of Goem, Goenkar and Goenkarponn had promised the moon but has reneged on almost every promise made.

Manohar Parrikar’s only achievement over the last year is of having almost stifled the entire voice of the Opposition. By his trademark tactics he has been able to keep on leash, and ground most of the Opposition MLAs. Surprisingly to the credit of Manohar Parrikar even some of the otherwise very vocal and proactive NGO’s have also gone into comatose.  The Chief Minister has been playing to the gallery on the issue of Goenkarponn but has done nothing to control the alarming and unacceptable levels of migration into Goa.

While in the Opposition Vijai Sardesai and Rohan Khaunte had consistently demanded the scrapping of the Investment Promotion Board (IPB) which they had alleged was BJP’s massive den for Corruption. Now in a U turn Vijai Sardesai is content with the IPB while Rohan Khaunte is brazenly the new Vice-Chairman of that very board.

Vijai Sardesai and his Goa Forward had also all along demanded the immediate removal of the Casinos from the River Mandovi. Something which Rohan Khaunte had also been very vociferous about until embracing the BJP. The escalating levels of crime in the State is a matter of grave concern. The rampant corruption continues unabated. Only the agents, brokers and beneficiaries have changed. Scams have continued galore.

This government has miserably handled the Mining issue with its uncalled for confrontational attitude with the Supreme Court. It is no secret that the ruling coalition has now cozied up with the Mining lobby too, only proving that Power corrupts and absolute Power corrupts absolutely.

So on its first anniversary this coalition government has nothing to celebrate or even cheer about. Governance has gone for a toss and the administration is in a state of limbo with Captain Manohar Parrikar himself under medical treatment in New York after assuring the people that he would govern Goa through video- conferencing and email from his hospital bed.  Towards the end of his political innings the power obsessed Manohar Parrikar has committed the worst possible political harkiri by not handing over the charge of the State to the Senior most Minister before he left for the United States. Today despite serious and pressing issues confronting the State we have no Chief Minister in place while the Government is hovering all over alike a headless chicken. Sorrowing lies our Goa. 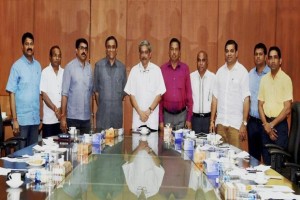