Today Satish Sonak would have turned 60. On 7th April last year he left us so suddenly leaving us all astonished. He was a great selfless warrior who tirelessly worked in seeking justice for the poor, downtrodden and the oppressed. A true Goenkar he always was and will continue to inspire us all to do our bit to carry his mission forward.

Satish Sonak was a truly remarkable gentleman who cared about his fellow human beings, championing the causes particularly of the less privileged and disadvantaged strata of society around him, willing to stand up and dared to be counted where others feared to venture. A true friend and companion of the deprived and voiceless.

Right from his student’s days Satish Sonak was an avid reader and fiery orator, whether in English, Konkani or Marathi. He also contributed thought provoking articles to several newspapers and interviewed on television several eminent personalities in various fields of public life. Indeed he demonstrated fabulous skills of interviewing — limiting himself to a minimum of verbiage and bringing forth from the interviewee the full range of his thoughts and experience. That showed us, the readers and viewers, Satish Sonak’s intellectual acumen.

Doing justice to his profession as a lawyer he became one of the foremost human rights warriors, taking up many causes such as the rights of women and children, marginalized tribes, the physically and mentally disadvantaged, anti-corruption and the rights of the common man. During the 1979 student agitation for 50% bus concession I was very privileged to work alongside him.

Even in death, his donation was the gift of his precious eyesight to another human being. Satish Sonak was indeed an inspiration to all and particularly the youth of Goa who are now the only hope for fast our sinking State.

Over the years Satish Sonak did everything possible for Goa. He was strongly opposed to corruption and the menacing culture of Casinos engulfing the State. Goa’s greed-infected political class should introspect and reflect as to the manner in which they have continued the rank and blatant degradation of Goa, something that Satish Sonak was always very concerned and extremely disturbed about.

Satish Sonak led a very simple and humble life. He may have been one of the few established Advocates in Goa who never owned a four wheeler.

Our true tribute to the great and distinguished soul, would be to steadfastly carry on that great vision and mission that our Satish Sonak had embarked on. Let us all vow to carry on the unfinished task Satish Sonak had undertaken to Save what remains of Goa.

We will all one day depart this world, but our Goa must truly live sans all this lip sympathy and rhetoric talk of Goem, Goenkar and Goenkarponn. And that would be living up to the hopes and aspirations of the great warrior Satish Sonak always was. 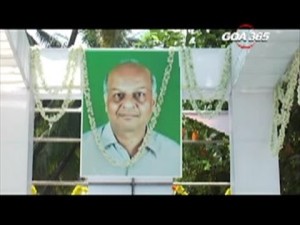 REMEMBERING OUR DEAR SATISH SONAK ON HIS BIRTHDAY – Aires Rodrigues