It is for the first time in the history of our country that a Session of the Legislative Assembly is being curtailed on account of the Chief Minister’s illness. This unprecedented and very high-handed move by the Goa government does not augur well as the legislators are being denied an opportunity to discuss the very vital issues confronting the State. Would the session have been curtailed if the Leader of the Opposition had fallen ill?

With the Senior most Minister Sudin Dhavalikar now appointed to officiate in the absence of Chief Minister Manohar Parrikar, the show must go on.

Manohar Parrikar while in the Opposition had always advocated for longer sessions of the Legislative Assembly but once in power did not walk his talk. Vijai Sardesai and Rohan Khaunte had earlier also demanded longer sessions but have surprisingly now concurred with this uncalled for curtailment.

The Legislative Assembly is a forum for our heftily paid MLAs to legislate good laws while holding the government accountable for its misdeeds. It is appalling that the session is being curtailed under the pretext of a very invalid reason, that the Chief Minister is unwell. Are we being made to reconcile that Manohar Parrikar is indispensable for holding the session of the Legislative Assembly? Merely because the Government enjoys the majority does not mean that it can be a Law unto itself and throw all Parliamentary practices to the wind. One man cannot hold the State or the nation to ransom. This political bankruptcy and unjustified decision of curtailing the session of the Goa Legislative Assembly needs to be strongly condemned. 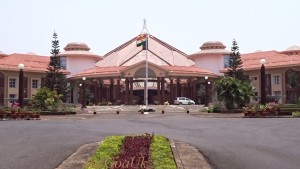