While the Supreme Court of India has been repeatedly highlighting the need of ensuring morality in public life, Chief Minister Manohar Parrikar to safeguard his own Chair has stooped to a very treacherous act by high-handedly appointing the very tainted and controversial Babush Monserrate as the Chairman of the newly created Greater Panaji Planning and Development Authority (PDA).

This very politically motivated and skewed move by Manohar Parrikar is devoid of any public interest. This needless PDA has been carved out to solely reward Goa Forward and Babush Monserrate for his support to the current ruling coalition and by giving him a lucrative avenue to further loot and plunder.

Babush Monserrate in January 2005 was stripped of the Town & Country Planning portfolio by Chief Minister Manohar Parrikar for having committed large scale and rampant illegalities in conversion of land.

Later due to his very controversial Regional Plan 2011 which led to a huge uproar and public outrage, Babush Monserrate in January 2007 was forced to resign as Town & Country Planning Minister.

Babush Monserrate has also committed very serious offences involving moral turpitude and stands charge sheeted by the CBI in the Panaji Police Station storming case while the alleged rape case against him is also pending probe before the Crime Branch.

Besides his deep rooted links with the land mafia, Babush Monserrate has huge land banks within the jurisdiction of this newly Greater Panaji PDA which includes Taleigao, Chimbel, St Cruz, Old Goa and Curca-Bambolim-Talaulim. We will now have to sadly witness the accelerated destruction and devastation of the remaining hills and fields in these villages. Sorrowing lies our Goa. 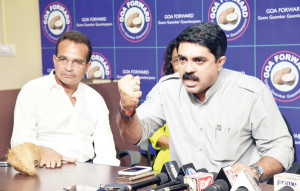