With the death of our dear former Chief Secretary Dr. J.C. Almeida we have lost yet another great Goan.

Dr. J.C. Almeida was a distinguished administrator and a dear friend to the student community. It was due to his untiring efforts that during the 1979 student agitation, he managed to prevail upon the then Government that the students of Goa should be bestowed 50% bus concession.

Having worked under Goa’s first Chief Minister Dayanand Bandodkar and other successive Chief Ministers, Dr J.C. Almeida was a living witness to how over the years our once beautiful State has been sinking from bad to worse.

On 6th November 2016 at a public function in Panaji, Dr Almeida while expressing deep anguish over the current destruction and devastation of Goa lamented that Goa was now gone and not salvageable. Pointing out to the rampant corruption and bad governance that had engulfed the State, Dr Almeida recollected how bureaucrats during the tenure of Chief Minister Dayanand Bandodkar and later under Shashikala Kakodkar strictly functioned within the parameters of law.

Dr J.C. Almeida should be a guiding inspiration to some of those spineless bureaucrats of today who unfortunately have ended up being slaves of their Political masters. 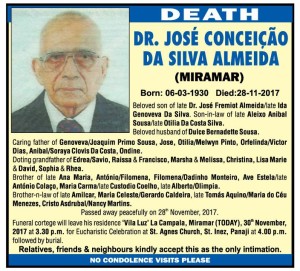