The 17th edition of the FIFA U-17 World Cup will be hosted by India between 6th and 28th October with some matches being played in Goa too. But it is a matter of immense anguish and disappointment that not a single of our Goan player has qualified to be on the Indian squad. This despite football being the official Sport of the State.

In 2012, Chief Minister Manohar Parrikar appointed one of his side-kick, the doctor cum politician Rufino Monteiro to head his newly created Goa Football Development Corporation (GFDC) on a whopping annual five crore budget. It has been money all down the drain in the name of promoting football while the cardiologist Dr Rufino Monteiro as Chairman of GFDC has been merrily and heartlessly even misusing the official INNOVA vehicle for all and sundry including visiting his patients while the future of soccer has gone awry and now remains in a critical state. Over the five long years the end product by GFDC has been a big Zero.

There is a need of a post-mortem and auditing of the GFDC accounts from 2012 to see where all those crores have been pilfered. It’s also high time to wind up that GFDC which has ended up as yet another BJP controlled white elephant. It would be prudent to now rightly entrust the Goa Football Association the sole task of professionally uplifting and restoring the past football glory in the State. 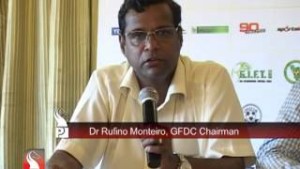