That fiat issued by Chief Minister Manohar Parrikar gagging and restraining the MLAs from publicly speaking on the narcotic trade in the State is preposterous. Surprisingly the now caged parrot Vijai Sardesai who has sold and surrendered all his self-respect has also caved in to His Master’s Voice.

It is no secret that the drug menace in the State has reached alarming levels. The drugs have infiltrated into all villages and has sadly reached the doorsteps of even educational institutions. The recent stabbing of a fellow student at a Ponda Higher Secondary by the son of a local BJP Councilor also has a drug angle to it.

The war on drugs has to be ruthless and tackled head on with no room for complacency whatsoever. But with the politicians and some police officers being in nexus with the drug Lords, we are waging a losing battle against the cancer of drugs that has corroded Goa’s very fabric.

How many more families will need to be destroyed and our youth ruined, for the authorities to wake up to the reality that Goa is today a drug haven along with the flourishing sex and gambling trade.  It all ends up being the components of having reduced the once Paradise of the East to now a deadly Crime destination. Amen 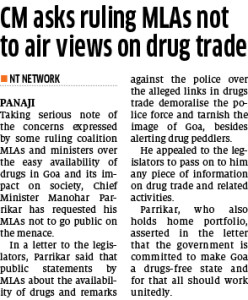 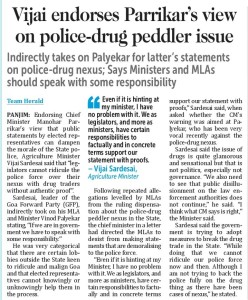