Chief Minister Manohar Parrikar and the BJP may be publicly sermonizing on Good Governance and Zero Tolerance to Corruption but the ground reality is very much to the contrary. Highly objectionable is Goa Government’s hurriedly issued order dated 4th August appointing Atmaram Nadkarni to represent the State before the Supreme Court in the infamous multi-crore Power scam case against former Power Minister Mauvin Godinho who now is the Panchayat Minister in the Manohar Parrikar led government.

A Bench of the Supreme Court comprising of Justice R.V.Raveendran and Justice H.L.Dattu on 3rd May 2011 had dismissed the Civil Appeal which was filed by Mauvin Godinho in the same matter while the Goa Government was represented by Adv. Ms Subhashini. What is now pending before the Supreme Court is the criminal case against Mauvin Godinho which the government should have infact requested her to handle as she is well versed with the facts of the case. But possibly because Adv. Subhashini would not tow the government line to defend Mauvin Godinho, the Government taking no risks has drafted in Atmaram Nadkarni on the job. That Atmaram Nadkarni for varied conflict of interest reasons should now not appear in the Mauvin Godinho matter is another issue.

In public interest and to protect the sanctity of India’s highest Temple of Justice, I was constrained to write to the Chief Justice of India drawing his attention to this devious ploy of the Government in appointing Atmaram Nadkarni to deceitfully shelter Mauvin Godinho in the Power scam case. The Supreme Court ought to appoint an Amicus in this case to ensure that Mauvin Godinho is not allowed to go scot free through sleight of the hand of this government.

In the Special Leave Petition filed in 2007 and pending before the Supreme Court for over a decade, Mauvin Godinho has challenged the order passed by the Bombay High Court at Goa directing framing of charges against him in the power scam case.

By an order dated October 26, 2007, then Justice Nelson Britto had directed framing of charges against Mauvin Godinho under Section 13(1) (d) (i) and (iii) of the Prevention of Corruption Act, 1988 read with Section 120B of the Indian Penal Code.

Justice Nelson Britto had in his order noted that the charges against Mauvin Godinho came to be investigated and charge sheet filed based on a complaint filed by Manohar Parrikar and that it appeared that the case took different turns depending upon which government was in power in Goa. 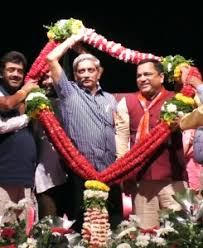 MAUVIN GODINHO CANNOT BE ABOVE THE LAW – Aires Rodrigues