Now given that the government has been unable to keep its promise of making the roads of Goa ‘pothole- free’, will the authorities ensure that at least the roads are cattle free. The alarming number of stray cattle on the roads across Goa including the Highways is a matter of great concern and should be dealt with on a priority. There is no point reminding this insensitive government again about the menace of stray dogs which today has reached alarming levels plaguing every nook and corner of Goa.

For the people of Goa the choices are limited. They are at the mercy of the stray dogs and so also the rabid corrupt politicians who keep mauling and crippling the State Exchequer. Unlike dogs the mating season for politicians is now throughout the year!

Ironically despite the battalions of stray dogs patrolling every street, the thefts and burglaries in Goa continue with the thieves having a field day. Maybe canines are too busy feasting on the garbage strewn everywhere with no time to be Watch dogs. 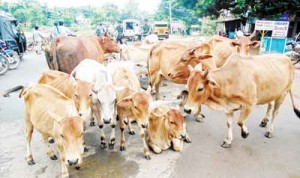