It was known way back in March that the 2016 BRICS summit was going to be hosted at Goa this October. So why could not the state BJP government which brags of Good Governance and Zero Tolerance to Corruption plan the infrastructure for the event well in advance instead of this last minute hushed up work which besides being very substandard is also costing the tax payer a bomb.

South Goa is being hurriedly spruced up and decked out with even all speed breakers removed to host the dignitaries. But if they decide to take a detour to pop in and peep into the North of Goa they would be shattered seeing the real side of a decaying and crumbling Goa. And if they land in the ravaged city of Mapusa they would have seen it all.

And now soon in November, the BJP will have another window of their annual opportunity to rake in another couple of crores on IFFI 2016 while they prepare for the state assembly elections scheduled early next year.  And this year there is no Exposition of the relics of St Francis Xavier, otherwise the BJP would have not spared even that solemn occasion to pocket some more moolah.

Over the last four and half years the BJP government has proven beyond any doubt to be Goa’s most corrupt government while Manohar Parrikar will go down in history for having been the most fraudulent and devious Chief Minister the State has ever seen. 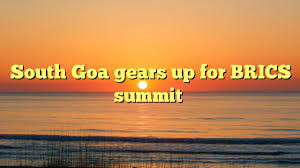