The Narendra Modi government is completing two years and has failed on all counts while throttling even basic democratic values. The foul modus operandi of high-handedly destabilizing elected governments in non-BJP ruled states must be stoutly deprecated. The right lessons must be learnt from Uttarakhand. India may be publicly acclaimed as the world’s largest democracy but the ground reality is that we are now ebbing away from Democracy with no transparency in the functioning of the Government. Any person attempting to tell the Government that all is not well, gets manhandled. An opponent is incarcerated as a seditionist!

Narendra Modi rode to power vowing that he will do in 50 months what others had not done in 50 years. He had promised ‘Acche din’ for the Aam Aadmi and Good governance but his then enthusiasm for freedom has been waning away and we now have an emerging culture of surveillance and secrecy.  Over the last two years he has only been blabbering and merrily touring the world. Fascism is at its peak, with sheer intolerance to any criticism

It is no secret that the BJP government is geared, controlled, and manipulated by the RSS and the VHP who are deeply entrenched in their very divisive ideology. The people of India are now seeing through NaMo’s vicious game plan with the chorus already bugling ‘BJP Hatao Desh Bachao’.

Governance by cloak of secrecy and opaqueness needs to be strongly resisted. It cannot be a hush-hush regime. We need to dismantle those walls of secrecy that continue to hound transparency and good governance. Over the last two years the poor have become poorer but only the BJP has become very cash rich.  In those very words of  Narendra Modi ‘Sabko sanmati de bhagwan’ (Let good sense prevail). It is only time that the voices will speak. Jai Hind! 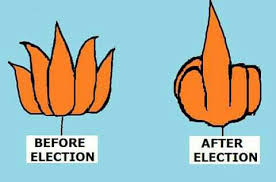