After that news of the alleged rape case involving Babush Monseratte broke out on 5th of May, the initial reaction by many was that the Santa Cruz MLA was being framed by this political opponents. But when the Crime Branch publicly disclosed with all confidence that they had clinching and strong evidence in the rape case, the public may have felt that the police were doing a professional job.

However it soon transpired that contrary to law the Defence Minister Manohar Parrikar had personally called up the Crime branch officials and directed them to bestow Babush Monseratte VIP treatment while in custody and to also hush up the case. So the Santa Cruz MLA was not lodged in the lock up but was kept within the comfort of the Crime Branch office. And with Manohar Parrikar on their back, the Crime Branch suddenly developed cold feet in continuing the investigation and bringing it to a logical conclusion. That the police had lost steam in the case was clear by the fact that they did not even appoint a Special Public Prosecutor as done in most high profile cases including the Tarun Tejpal and Louis Berger case. 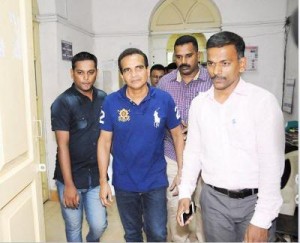