Goa Governor Mridula Sinha wrote a two page note to Chief Minister Laxmikant Parsekar posing pointed questions while returning back the cabinet proposal to grant pardon to then jailed Nuvem MLA and former Minister Mickky Pacheco. This has been revealed in information obtained from the Home Department under the Right to Information Act.

Governor Mridula Sinha in her note dated 27th August stated that on a careful study of Mickky Pacheco’s case that she was prima facie not satisfied that there existed sound, credible, sufficient and fully justified reasons besides special and mitigating circumstances for grant of any mercy to Mickky Pacheco.

Governor Sinha further stated that the exercise of power under Article 161 of the Constitution had to be done sparingly, cautiously and only in exceptionally exceptional and appropriate cases where the action should be on the touch stone of justness, fairness and reasonableness.

Virtually implying that the cabinet had not done its homework before recommending pardon to Mickky Pacheco, Governor Sinha while returning back the cabinet proposal sought that the government and cabinet reappreciate and meticulously analyze all the facts relevant and germane to the case within the parameters of law and giving due regard to the Constitutional provisions.

Governor Sinha further sought clarification from the cabinet whether the grounds of Mickky Pacheco’s mercy petition were truly genuine, vital, valid, bonafide, rational, compelling, substantial and adequate enough to warrant compassion and sympathy for premature release in a case where the Supreme Court had rejected Mickky Pacheco’s petition.

Asserting that while taking decisions on such mercy petitions the government had to be conscious on past Court pronouncements on the issue and the likely implications besides possible difficulties that the Government may face, Governor Sinha questioned the government on whether Mickky Pacheco’s premature release would not prompt other convicts to also file such mercy petitions.

Governor Sinha in her note further stated that if some mercy petitions are granted and others rejected there was possibility of legal disputes, adverse criticism and it could have the potential to shock the conscience of the public and circumvent the Constitutional provisions and procedure.

Pointing out that in the event of Mickky Pacheco’s premature release the Government could also receive other genuine cases desiring pardon leading to mass release of convicts which will be subject to judicial review, Governor Sinha sought explanation from the government on what could be the possible repercussions and reactions from other States and Central government besides the Judiciary.

Interestingly in his 18 page long winding opinion Atmaram Nadkarni does not opine whether Mickky Pacheco’s case warranted pardon but concludes his very vague opinion by stating that the matter after examination by the Law and Home department be placed before the Chief Minister for being brought before the Council of Ministers for a decision.

As per the notings on 29th July Chief Minister Laxmikant Parsekar directed that the cabinet note to grant Mickky Pacheco pardon be placed before the Council of Ministers by circulation and returned by 10 am the very next day i.e. 30th July which was later the same day forwarded to the Governor for her consideration.

After examining the pardon plea for almost a month, Governor Sinha returned the cabinet proposal while seeking various explanations from the government.

From the perusal of the documents it is very heartening to note that Governor Mridula Sinha had applied her independent mind and acted within the constitutional framework while refusing to act as a rubber stamp.

The velocity in which the government had acted on Mickky Pacheco’s pardon plea and now in the extension to Goa University Vice Chancellor Dr Satish Shetye it only proves that the principles of good governance and rule of law were flouted with impunity.

Advocate General Atmaram Nadkarni who is well known for giving politically tailored opinions has clearly misguided the government in the Mickky Pacheco and the Dr Satish Shetye saga as well. 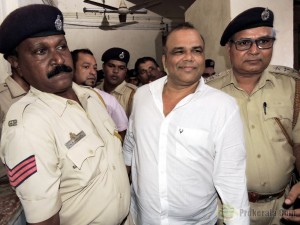