When the matter came up for hearing Dattaguru Sawant who has remained absent for the last 12 hearings since August last year was again absent today.

Dattaguru Sawant who was promoted as Police Inspector earlier this year is currently posted at the Crime Branch and is the Investigating officer in the Louis Berger Case.

While noting that Inspector Dattaguru Sawant was again absent and had not to date filed a reply to the complaint against him, Justice Khandeparkar ordered that the proceedings now proceed ex-parte against Dattaguru Sawant and adjourned the matter to October 15th.

The complaint of extortion was filed by two porters from Margao Railway Station Mohammed Samsher Alam Sayyed and his brother Mohammed Abass Sayyed  that Dattaguru Sawant as Police Sub-Inspector at Konkan Railway Station on 1st September 2013 along with Head Constable Manoj Mandrekar had demanded free helmets from the goods consignment that had arrived at the Railway Station.

The porters in their complaint further stated that as they refused to part away with the free helmets that Dattaguru Sawant arrested and implicated them in a false and fabricated case which was not only a grave misconduct but a severe police atrocity.

The porters in their complaint have sought directions by the SPCA to the Director General of Police to register an F.I.R besides disciplinary action against Police Inspector Dattaguru Sawant and Head Constable Manoj Mandrekar.

Dattaguru Sawant was inducted as a Police Sub- Inspector in 2002 during Manohar Parrikar’s first term as Chief Minister but his appointment was set aside by the High Court as illegal. The matter is now pending before the Supreme Court.

He was later dismissed from service in 2004 for allegedly extorting money at Mapusa but managed to be reinstated in 2006.  Dattaguru Sawant had a criminal record even before becoming a police officer with an F.I.R registered against him 1999 at the Panaji Police Station for having along with some BJP activists sprayed black ink on then Goa Pradesh Congress Committee President Shantaram Naik at the entrance of Cafe Bhonsle in Panaji.

Dattaguru Sawant has had a very shoddy record wherever he has been posted. While at Valpoi police station on 26th June 2012 he publicly assaulted a local resident Vincent Fernandez and illegally detained him.

Unless criminal minded corrupt and pervert officers like Dattaguru Sawant are not flushed out of the Goa Police, the rule of the jungle is here to say. 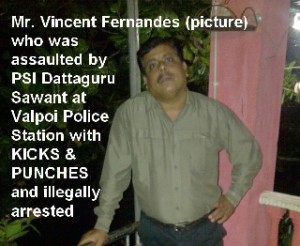