In this competitive age for India to stride ahead, it is time to do away with the skewed policy of reservations for jobs and in electoral politics as well. Admissions to all professional colleges have to be also strictly on merit.

The Constitution of India provides for the Fundamental Right to Equality, without discrimination on the grounds of sex, caste, creed or religion. The very concept of reservations is all about vote bank politics.

It is appalling at how plagued we have become by a sheer sense of illogicality.  The government can financially help the economically backward in pursuit of further education so that they compete with the mainstream. On one hand the law provides for equality and on the other hand there is a policy of reservation, which by its very genesis is a favour. Equality doesn’t brook favours.

After 68 years of Independence the golden rule has to be to aim to get the best qualified person for every position – irrespective of sex, caste, creed or religion.

May those great words of Rabindranath Tagore guide us:

Where the mind is without fear and the head is held high
Where knowledge is free
Where the world has not been broken up into fragments
By narrow domestic walls
Where words come out from the depth of truth
Where tireless striving stretches its arms towards perfection
Where the clear stream of reason has not lost its way
Into the dreary desert sand of dead habit
Where the mind is led forward by thee
Into ever-widening thought and action
Into that heaven of freedom, my Father, let my country awake. 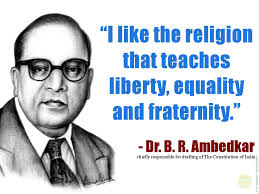