Are those very dark days of that 1975 Emergency once again looming very large?

Our Press, like the Judiciary, has to be free from political, governmental or any other interference whatsoever. In fact, it is the solemn professional duty of every journalist to be totally independent and unbiased with no leanings whatsoever towards any political party or politician. This holds good equally to those in print media as well as in the electronic media. Freedom of the press and that very sacred solemn Freedom of expression are so very fundamental to the very survival of any democracy.

However, sadly today most of the journalist fraternity in Goa have become a mouthpiece of the ruling Government, patently falling prey to the strategy of carrot and stick, to cunningly manage and manipulate a large chunk of our media.

In times when sadly most of the media is gagged or manipulated by the government of the day, it is the social networking sites like Face book, Whats App and Twitter that provides us a forum to fearlessly express our thoughts and ventilate views on any issue.

Through social media I have been able to reach out to lakhs of people across the globe while posting my views and opinions on various issues. Though my posts are not sugar coated as many would have liked, I always post only after ascertaining the facts and speak out from my very heart. Anyone who differs is free to express his own viewpoint and incase I may have erred I would be more than pleased to most humbly stand corrected as to err is human.

It is very disturbing that the government of the day is suffocating people’s fundamental right to speak and express their thoughts on issues that concern society. The threat to freedom of the Press in Goa hangs like the proverbial sword of Damocles. The current government cannot claim to respect the freedom of the press.

The press is considered to be the watchdog of democracy. Sadly, there is scant regard for this truism in Goa, and the irony is, that our country is the world’s largest democracy. There has to be a way to ensure that the newspapers do not end up being dependent on government advertisements. Journalists should also not fall prey to the crumbs and largesse from Politicians and return the favours with censored news.

Self-discipline, which is so crucial for the survival of any democracy, is fast disappearing. Tolerance levels are declining and arrogance is all-pervasive. More often than not, political power is used to further the cause of the power-hungry rather than to serve the masses. The press, on its part, should bear in mind that freedom of the press does not mean a license to write anything that suits those in power. This freedom is precious and it has to be used judiciously and fairly. When this freedom is misused to keep those in power content, the public respect for this noble profession is bound to diminish.

May the words of Thomas Jefferson inspire all those in that noble journalism profession “When the press is free and every man able to read, all is safe.” 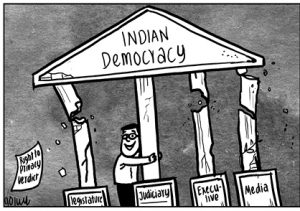 NO ACCHE DIN FOR FREEDOM OF SPEECH – Aires Rodrigues