In her Republic day address Governor Mridula Sinha has finally publicly admitted what we have all known for years that Goa is plagued with the social evils of the drug trade and sex Tourism. The government should realize that the Casinos are a malady to the State and must depart for Goa to remain afloat.

The drug menace across Goa is a matter of very grave concern and should have received the Government’s top most priority attention and action. Unlike a few years ago, the narcotics trade today is no longer restricted to the coastal belt. Drugs are being openly sold and merrily consumed in every nook and corner of the State with even the hinterland now infested. They are freely available at the markets, bus terminals and even at the entrances of many educational institutions.

Due to lack of coercive and corrective measures by successive governments we have reached a point of crisis where even the law enforcement officials are now helpless. Instead of combating the source of drugs, all that we have been hearing is empty rhetoric on eradicating drugs while the ground reality is that the hazard is only spreading further across the State.

With ruling politicians lending patronage to the drug trade, Goa today has been officially reduced to a narcotic, sex, gambling and crime haven. A very unsafe destination in a sorry state of affairs.

Posterity will never forgive the current bunch of ruling politicians for their selfish role in the irreparable damage and destruction of what was once known as beautiful Goa, the Paradise of the East. 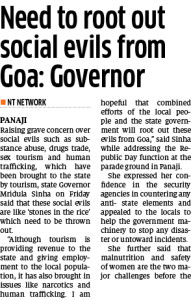 ENOUGH OF TALK, WE NOW NEED SOME ACTION TO SAVE GOA – Aires Rodrigues