A contempt of Court petition has today been filed before the Bombay High Court at Goa over the illegal use of the red beacon by Goa’s Chief Information Commissioner (CIC) Prashant Prabhu Tendolkar.

The letter petition was mentioned today before a Division Bench comprising of Justice F.M.Reis and Justice K.L.Wadane who agreed to examine the petition.

CIC Prashant Tendolkar continues to illegally use the red beacon in rank violation of the Supreme Court order. The rule of law has to prevail and the CIC cannot be high- handedly using a perk and privilege he is not entitled to.  CIC Prashant Tendolkar is illegally and blatantly using the red beacon on his official vehicle GA- 07-G-5555 in clear defiance of law and amounting to a gross contempt of the Supreme Court’s order.

In the petition today it has been submitted to the High Court that interest of Justice would demand that in view of the facts and circumstances of the case, that Suo moto cognizance be taken by the High Court in calling for the records and after examining the same taking appropriate action.

The Supreme Court in its order dated December 10, 2013 while expressing deep concern over the misuse of the red beacon had given certain directions to the State Government and in compliance the Goa Government by a notification dated 3rd July 2014 had notified the list of persons entitled to use the red beacon on their official vehicle.

The High Court’s attention has today been drawn that as per that notification only allowed to use the red beacon are the Governor, Chief Minister and Ministers, Speaker, Deputy Speaker, Chief Justice and Judges of the High Court, Leader of Opposition, Advocate General and the Chief Secretary.

The law enforcement officers though fully aware of this blatant violation had failed to take action against CIC Prashant Tendolkar only because he is politically well connected and only after a complaint was filed a challan and show cause notice was issued to the CIC.

The attention of the High Court has also been drawn to the very evasive, misleading and mischievous reply of the CIC to the show cause notice issued by the transport department. The CIC while trying to justify his using the red beacon has strangely claimed that he is equivalent in rank with a Supreme Court Judge. 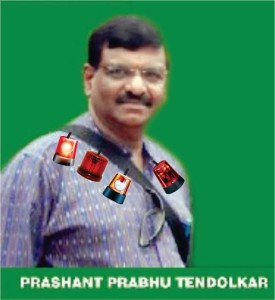