The BJP lectures loud and sermonizes on Zero Tolerance to Corruption but has been acting right to the contrary. The latest is the selection of the grossly very tainted Rajendra Arlekar for elevation as a Minister.

In that disproportionate assets case against Rajendra Arlekar he was let free by the Court on the technical ground that the Anti- Corruption Branch had not sought sanction of the government in the case. Obviously the ACB will never seek a sanction against their own ruling party politician. So Rajendra Arlekar has a lot to answer on his mountain of assets.

Besides the 72 lakhs Rajendra Arlekar also paid an amount of Rs 2,52,000 towards stamp duty and a further Rs 2,16,280 as registration and processing fees of that Sale deed.

In an affidavit filed by Rajendra Arlekar before Goa’s Chief Electoral officer on 9th February 2012 he had shown his income for the year 2010-2011 as Rs 2,76,671 and that of his wife Anagha Deshpande Arlekar who is a school teacher as Rs 5,87,186. So the purchase of the plot for 72 lakhs by Rajendra Arlekar was clearly disproportionate to his last known source of income.

Rajendra Arlekar should explain as to how within a short span of just over a year after becoming Speaker of the Goa Legislative Assembly he was able to clear his huge liabilities of Rs 30,54,314 and also liabilities by way of Government dues of Rs 2,64,734.

Rajendra Arlekar in his affidavit on 9th February 2012 had shown his total income for the year 2010-2011 as a mere Rs 2,76,671 which prima facie reveals that Rajendra Arlekar concealed the real income earned by him from his HP petrol pump dealership “Om Shree Vetobaa” at Vasco.

Rajendra Arlekar has continued with that Hindustan Petroleum petrol pump dealership illegally after becoming an MLA and Speaker of the Goa Legislative Assembly.

The guidelines further mandate that the dealer of the petrol pump shall not be eligible for taking up any other employment. So as soon as Rajendra Arlekar became MLA he was duty bound to surrender the dealership to make way for somebody unemployed.

Now the RSS Pracharak Rajendra Arlekar being all set to be a Minister tomorrow will be eyeing for very lucrative portfolios.  PWD, Transport, Forest, Environment and Mining may be some amongst in his wish list so that he further prospers financially and his Acche din continue. 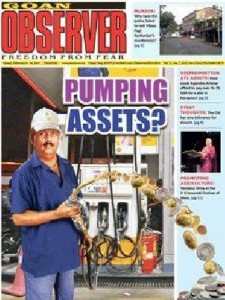 One thought on “RAJENDRA ARLEKAR COBBLING ASSETS: A TALE OF RAGS TO RICHES”