Our Mhadei is the one very critical issue that should be of greatest concern to every Goan. Our state is on its way to be parched and will be reduced to a desert on account of the notorious Atmaram Nadkarni having taken us for a ride.

The records show that Atmaram Nadkarni who was representing Goa falsely advised the State Government not to file an appeal against the award of the Mhadei Water Dispute Tribunal by misleading the government that Goa had won the case. The manner in which the interests of Goa were deviously compromised by Atmaram Nadkarni, has made it very clear that he was obviously in rank collusion with Karnataka.

As a result of this disastrous advice given by Atmaram Nadkarni there was a delay of almost one year in filing the appeal before the Supreme Court which was done only after Atmaram Nadkarni’s close relative Dattaprasad Lawande was sacked as the Advocate General of Goa.

A perusal of the records shows that Atmaram Nadkarni did not file proper replies before the Tribunal nor was there an appropriate opposition to Karnataka’s case. Neither did Atmaram Nadkarni oppose use of water by Karnataka within the basin and this completely weakened Goa’s case.

Atmaram Nadkarni and his huge bandwagon of advocates some of whom were his family members pocketed crores of rupees by way of legal fees that the cash strapped Goa Government had to cough up. One entire floor at Delhi’s Goa Niwas was occupied for almost two years by his juniors who did not do any work but made merry and had a ball while they were handsomely paid.

Before being appointed as Additional Solicitor General while at Goa in some Mining cases Atmaram Nadkarni would draft the petitions on behalf of the Mining Companies and thereafter appear as Advocate General for the State of Goa.

The Government should scrutinize all his bills and a thorough inquiry into all the payments made to him and his battalion of lawyers in the Mhadei case must be conducted by an independent agency.

Now after being sacked from appearing for Goa in the Mhadei case, Atmaram Nadkarni is reportedly in the Supreme Court trying to interfere in the Mhadei matter by trying to hamper and jeopardize Goa’s interest.

It is high time that Prime Minister Narendra Modi sacks Atmaram Nadkarni as Additional Solicitor General of Goa. There needs to be a probe into the mind-boggling assets acquired by Atmaram Nadkarni including the huge palatial multi-storied bungalow which he is currently constructing at Caranzalem near Hotel International with all his ill-gotten wealth.

In the style of politicians there was a public sponsored Atmaram Nadkarni’s 50th birthday celebration held on November 23rd 2013 at the five starred Taj Fort Aguada at Sinquerim in Goa. The party which had around 400 guests with imported Scotch whisky flowing through the night was estimated to have cost around Rs 20 lakhs with a bill of Rs 14 lakhs for food and alcohol issued in the name of then Calangute de-facto Sarpanch who was in charge of collecting money from all and sundry to foot the bill of Atmaram Nadkarni’s that lavish birthday.

As Additional Solicitor General of India Atmaram Nadkarni through his friend Manohar Parrikar had managed to get Z plus security cover and moved like a King with a convoy of police jeeps whenever he visited Goa. That security was however rightly withdrawn by the Government in October last year when it was pointed out to the authorities that even the Attorney General of India is not entitled to it.

So if an extremely tainted person who lacks integrity- like Atmaram Nadkarni is allowed to occupy the August chair as Judge of the highest temple of Justice in our country, the Supreme Court will be reduced to a den for fixing matters – and become a trader’s paradise. What would be a Judicial catastrophic blunder under no circumstances should be allowed as the integrity and sanctity of the Honourable Supreme Court of India must be preserved at all cost. 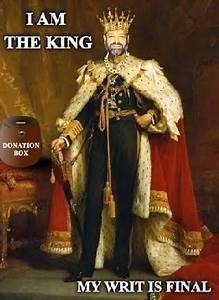