With the next Corporation of City of Panaji (CCP) elections scheduled for March 2021 this is the last year of the current Corporators. At the last 2016 CCP elections in the manifesto of the Panaji City Corporation Development Front the now Panaji MLA Atanasio (Babush) Monserrate had said‘I know your problems. I have the solutions. I have the ability to deliver’.

But sadly Panaji has gone from bad to worse on all fronts with the CCP embroiled in rampant corruption and gross nepotism. Merit and competence has not been the criteria in selecting the Mayor as Babush Monseratte conveniently opts for his Yes-man. More problems created than solved. No solutions delivered.

With the very controversial Uday Madkaikar taking over as the Mayor last year an already beleaguered CCP, has only landed up in further dire straits. Babush Monseratte has reportedly decided to keep Uday Madkaikar in the Chair for another year on March 12th despite there being very competent and unblemished Corporators like Rahul Lotlikar.

It is known to all that Uday Madkaikar was the mastermind of that infamous Panaji Market multi-crore scam and other illegalities that has over the years rocked the CCP.It is intriguing that late Manohar Parrikar who as Leader of Opposition had rightly raised a ruckus over that documented Panaji Market scam, after becoming Chief Minister however conveniently for political expediency choseto sleep over the issue.

It is anguishing that in a display of political bankruptcy the CCP Corporators have failed to select the best and brightest amongst them to steer the City. What an eyesore! 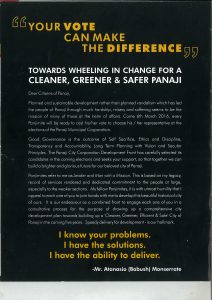 END OF THE ROAD FOR PANAJI – Aires Rodrigues