The loyalty of every Judge in our country has to be only to the very sacred Constitution of India. The recent eulogizing of Prime Minister Narendra Modi by Supreme Court Judge Arun Mishra was totally uncalled for an in utter bad taste. Justice Mishra who is due to retire on 2nd September went well overboard. We all saw how then Chief Justice of India P. Sathasivam who within weeks of his retirement was rewarded by Narendra Modi with an appointment on 31st August 2014 as the Governor of Kerala.

As a desperate BJP wants to overpower the Judiciary too, there is a very disturbing disquiet over the slippery slope on which judicial values are slithering. With Narendra Modi all out to corrode and corrupt even the Independence of the Judiciary, to ensure the highest standards of judicial independence and to ward off even the faintest trace of governmental influence on the judiciary, there needs to be at least a two year “cooling off period” for retiring judges before they accept any post retirement posting.

The demand to keep Supreme Court and High Court Judges away from immediately taking such post retirement benefits becomes the need of the hour and will thus ensure that those about to retire do not run behind those in the establishment thus giving a death knell to the independence of the judiciary. There is a need of concerted efforts towards propping up highest standards of judicial accountability. 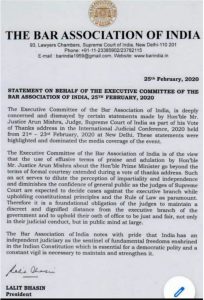