Panaji MLA Babush Monseratte is solely responsible for the horrendous traffic mayhem that the city helplessly witnessed on Saturday due to the Carnival parade. The police had initially rightly declined permission for it to be held on Dayanand Bandodkar Marg but as expected buckled down after the MLA as usual flexed his political muscles. The government should ensure that such inconvenience to the commuting public is not allowed. In public interest all such parades and processions in Panaji should be held from Miramar to Dona Paula circle so that the traffic in the city does not come to a standstill.  The onus is on the authorities to be very cautious while giving permissions for events that will end up in a traffic chaos. There has to be a concerted effort to decongest an already very jam-packed Panaji. 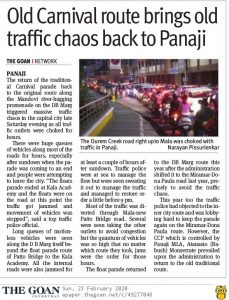