To err is human but to accept one’s fault is Divine. Bowing to a wave of protests and condemnation, the accident prone Pramod Sawant has accepted that the needless imposition of Section 144 was a blunder and decided to withdraw it albeit very late in the day. A humble mea culpa to the people of the State together with honest reasons why this false flag was created and imposed in the first place would also help.

This regrettable episode should act as a lesson to the CM that in future he should think before he acts by taking learned advice from well informed people like our very upright and learned Advocate General Devidas Pangam at least on legal matters affecting the state. He should also allow the bureaucrats to function without political pressure. Otherwise he may end up as a laughing stock and trust in his leadership and government will continue to be eroded.

Despite the withdrawal, questions will continue to be asked. Was this Section 144 invoked for any legitimate reason or was it an ill thought out cynical move by the CM and his government to subvert legitimate protests in our democratic and peaceful state against a wave of divisive initiatives by the BJP adversely affecting the lives of people and business.

No doubt, the CM will have been told that his imposition of Section 144 has backfired spectacularly as the anxiety, fear, panic and chaos has already adversely affected the economy and tourism.  Tourists, business and investors will always shy away from a climate of fear, confusion, doubt and restrictions imposed without justification.

As always it is the innocent people that suffer from the illogical actions of an incompetent Government for whom FEAR is an acronym for False Evidence Appearing Real! 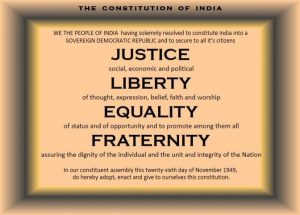