Let us all be very confident that our very Honourable Chief Justice of India Sharad Arvind Bobde will not even remotely consider the name of the extremely notorious criminal minded Atmaram Nadkarni for elevation as a Supreme Court Judge.

We have known our now Chief Justice of India (CJI) while he presided as Judge of the Bombay High Court  at Goa and the so high ethical principles and moral values he stood for. I am sure he will not sully his good name and reputation by succumbing to Atmaram Nadkarni’s persistent and devious lobbying. Our CJI will ensure that the darkest day in India’s Judiciary does not dawn. Infact I would have not appointed such an unlawful Atmaram Nadkarni even as a Peon or Sweeper in my office.

Atmaram Nadkarni after having looted Goa by crores in the name of Mhadei and Mining besides Casinos should be criminally prosecuted and every paisa of the tax payer which he has highhandedly pocketed should be recovered with interest and penalty.

Atmaram Nadkarni who is known for his Black magic and Tantriks has for so long got away with all his acts of omission and commission but as they say enough is enough. Now the Almighty God of all Faiths will take care of this so called legal beast who has taken Goa and Goans for a very long ride. Trips to Sabrimala for cleansing, will not cleanse the stains of the sins committed by him, by virtue of his office.

When Jesus Christ drove away the traders from the temple with a whip of cords, he said  “Take these things out of here! Stop making my Father’s house a marketplace!”

We cannot allow the Temple of Justice to be the den of the dacoit. 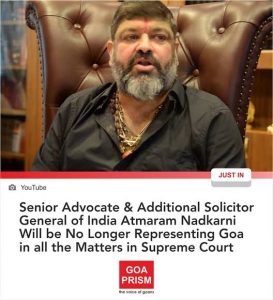