Chief Minister Pramod Sawant needs to with folded hands truly apologize to the people of Goa for having falsely certified on 31st of August last year that our State was now officially Open Defecation Free (ODF).  The very disgusting and appalling ground reality continues for all to see with people urinating and defecating out in the open anywhere and everywhere. In the hills, the fields and along the riverside across Goa sorrowfully we see it all.

Even at the very door step of the Goa Secretariat at Porvorim on that slope hordes of laborers continue to merrily ease themselves at the very seat of Power. It is also not unusual seeing tourists on arrival urinating around the bus terminals and railway stations due to lack of proper toilets. Same is the sorry state of affairs even at most of our government offices.

Having miserably failed to deliver on any of its promises from effective garbage management to safe and smooth roads and adequate medical facilities to name but a few, this very incompetent Goa Government must hang its head in shame. Nothing more needs to be said on this Government’s failed solemn promise to the long suffering people of Goa that all the roads would be soon free of potholes. What an awful Shame

The bottom line is that for Goa to be Open Defecation Free we would have to first liberate ourselves from the current rampant corruption that our State is engulfed in. It is high time our Chief Minister realizes that the astute people of Goa are no fools to be hoodwinked by false facts and figures deviously released by his Government. In governing a State there can never ever be any room whatsoever for Lies and Deceit. 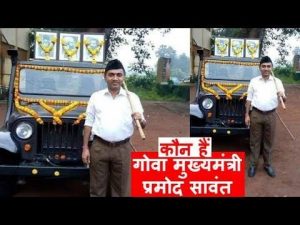 IF EVEN THE CHIEF MINISTER BLATANTLY LIES, WHOM DO WE TRUST – Aires Rodrigues