With Uddhav Thackeray assuming the reigns of Maharashtra as Chief Minister, let us all very sincerely wish him and his team all the very best. May they govern with a sense of courage, commitment, sincerity and compassion.

Governing the huge State and ridding Maharashtra of all the piled up problems will be no easy task. With all that political dust and war of words now laid to rest, it would be prudent for the Chief Minister to take everybody on board to ensure a better and resilient Maharashtra. After all Respect is earned, Honesty is appreciated, Trust is gained, and Loyalty will be returned. People are entitled to Good Governance. There should never be any room for politics of revenge and retribution. Our India has to remain secular free from the malaise of hate.

I had the privilege to have an interaction with the very suave Uddhav while he was in Goa during the 2004 Lok Sabha Elections. That appointment was arranged by the then Shiv Sena Rajya Sabha MP late Ekanath Thakur who hailed from Sindhudurg. At my meeting with Uddhav at Cidade de Goa in Dona Paula, I recollect his son Aaditya who was then just 14 was around. He has been well groomed by his father and today at 29 is the MLA of Worli besides being a law graduate. 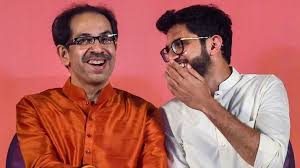