While the BJP Vice-President Uma Bharti raised an uproar about her party doing business with the tainted former Haryana Minister Gopal Kanda, maybe she lost sight that the BJP in Goa has embraced galore by inducting into the party those criminally stained to the hilt.

In Goa the BJP has provided a very safe refuge to the rape accused Babush Monseratte who along with his wife and now Revenue Minister Jennifer Monseratte are the prime accused in that infamous 2008 Panaji Police Station stoning case.

Babu Kavlekar who till just a few months ago was hounded by the Anti Corruption Branch and the Crime Branch of the Goa Police with all sorts of criminal cases has now been rewarded with the Deputy Chief Minister’s throne after joining the saffron party. He can now also run and further merrily enlarge his illegal Matka trade absolutely unhindered.

Mauvin Godinho who was booked and stands charge sheeted on that complaint filed by Manohar Parrikar himself in that infamous 2001 multi crore Power scam had his fortunes delight after having crossed over to the saffron party.

Vishwajit Rane against whom a mining extortion case was also orchestrated by Manohar Parrikar is now having the last laugh in his loot and plunder as Health Minister. Pandurang Madkaikar who was similarly hounded by Manohar Parrikar in a land grab case is now a Saint for the BJP but not so for St Francis Xavier.

Cuncolim MLA Clafasio Dias can know breathe easy in that illegal stone crusher and government land grab case while the St Andre MLA Francis Silveira who was impoverished while in the Opposition has now all the political protection to conduct the otherwise illegal bull fights. The now politically naked St Cruz MLA Tony Fernandes can at present freely venture in his new found Matka trade. And about the chronic party turncoat Isidore Fernandes nothing more needs to be said.

These actions are clearly those of a desperate Government clinging to power by resorting to political prostitution by pimping politicians who obtained and betrayed a mandate from the people through the lure of the rupee and lust for power and illegal protection from the law. These undemocratic actions by abusing the constitutional rights of the people that vote in good faith will be short-lived only until the next power grab. Politicians must realise that they can run and duck and dive but they cannot hide from the truth, justice and the wrath of the people who are no longer misguided, blinded or distracted by political sweeteners.

So the writing is on the wall, that if P.Chidambaran and other currently targeted politicians in the Opposition had cared to bow down to the BJP they would have been saved from their current horrifying travails. The law enforcement authorities are duty bound to act against all the corrupt and cannot pick and chose at the whims and fancies of their political Lords.

BJP’s modus operandi is there for all to see, the latest is the Haryana very sordid saga. On Friday 25th October after Dushyant Chautala and his other nine MLAs of the Jannayak Janata Party (JJP) decided to align with the BJP, within moments the government machinery swiftly moved into action to release his corruption jailed father Ajay Chautala on a two week parole. A very glaring and blatant instance as to how Power corrupts and absolute Power corrupts absolutely.

Even taking a dip in the Ganges will bring no solace, but joining the BJP cleanses and absolves you of all your sins while putting an end to all your legal vows and hurdles. A very sad state of our great country, once acclaimed as the world’s largest democracy. 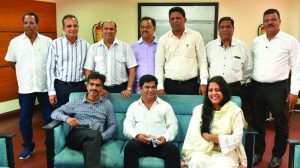 BJP IS NOW A SAFE ABODE FOR THE TAINTED   – Aires Rodrigues