The people’s mandate in the Maharashtra and Haryana Assembly elections besides the other by-elections should act as an eye-opener to the arrogant and power intoxicated BJP. These results usher a ray of hope against the current authoritarian and tyrannical regime which has torn to pieces the fundamental principles of our Indian constitution.

Despite all the money and muscle power the saffron brigade were not able to take the voters for a ride this time around. The Narendra Modi government has been blatantly misusing the various wings of the law enforcement authorities to unduly target and harass opposition leaders but ultimately in a democracy it’s only the will of the people that must prevail.

While the country’s economy is in utter doldrums, the bigheaded and domineering BJP has been using all its devious marketing techniques to flog its skewed policies and divisive politics. A united India will ensure that democracy and the rule of law is restored. This is what our nation’s founding fathers toiled for, and their sacrifices cannot be allowed to go in vain. The Narendra Modi – Amit Shah venomous Cocktail is something our country will be better off without.

The BJP has shown that it will do or say anything to desperately cling to power in flagrant violation of the truth or by means to distort the facts. This Government has lost the art of successful politics of gathering consensus through honest and free discussion, debate and persuasion which can then result in action and implementation through proper legislation. Many would wonder if this BJP Government ever possessed this art of successful honest politics in the first place.

As these elections show, the writing is clearly on the wall for the desperate BJP. They must realise that the tide is turning and that trying to fool the people who are much more economically and politically astute and aware than ever before is not easy.

Cal Thomas the popular American political commentator once observed ‘’One of the reasons people hate politics is that truth is rarely a politician’s objective, election and power are’’. 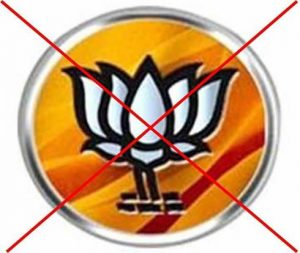 A MORAL DEFEAT FOR THE BJP – Aires Rodrigues