It was very highly inappropriate and so high-handed on the part of Union Railway Minister Piyush Goyal of having accused the NGO’s in Goa of obstructing government work. Infact in the current hazy political scenario in our State, the role and vigilance by civil society becomes all the more necessary and vital. Had it not been due to the watchfulness of citizens, the abundant scams of this government over the years would not have come to light. If any NGO is violating the law, the government is free to take appropriate action within the framework of law instead of unduly castigating them all.

While the ruling politicians have been amassing crores galore, Goa’s public are left with erratic power and water supply, polluted rivers and potholed roads with garbage strewn across the State. This insensitive government has abdicated in its duty by not acting against even the Formalin laced fish and other adulterated food stuff that is being freely sold.

While power hungry MLAs have been shamelessly jumping across parties, governance is stalled while corruption is at its peak. Pramod Sawant is successfully carrying on Manohar Parrikar’s legacy of dishing out false assurances with dates and deadlines which will never be fulfilled and with endless U-Turns.

When incompetent politicians run out of ideas it’s always easy to blame others. They spend their time blaming the world but they must realise that any successes or failures are entirely their responsibility. They spend too much time finding others to blame especially those that seek to ensure that politicians are held to account for the trust and duty that they have been entrusted with by the people. They are ever so ready to make excuses rather than putting in maximum energy to get on with the desperate and pressing needs of the people and state.

To solve any problem, self-absorbed politicians must recognize their key role and greater share of their responsibility. Blaming and using others as scapegoats will not solve Goa’s problems. 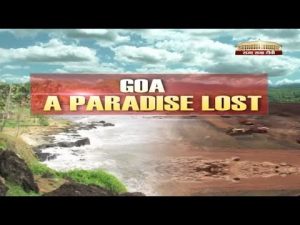 OUR GOA IS SINKING BY THE DAY – Aires Rodrigues