With the Court having now framed serious charges of rape against Babush Monseratte, the voters of Panaji must be so very embarrassed that he continues as their MLA. It is an irony that he is also the founder Chairman of a Taleigao High School. Besides Babush Monserratte stands charge sheeted by the CBI in that infamous Panaji Police Station storming case in which current Revenue Minister Jennifer Momseratte is accused No 2.

Probity and Propriety in public life demands that Babush Monseratte should immediately resign as MLA and only return to the political turf after he is cleared of all these serious criminal cases pending against him.  Needles s to say it would be very proper that Babush Monseratte does not take charge as Chairman of the very lucrative Greater Panaji PDA.

Lawmakers must never be or be seen to be law breakers. If lawmakers cannot respect and uphold the very law they legislate either by their words or deeds, how can the masses be expected to respect the lawmakers or the law?

In any well-run democracy, the integrity of our legislature should never be compromised by either the institutions or the people that have been elected to serve in them. Inducting people with serious criminal cases pending to positions of power for ulterior motives is a fraud on the many by a few as they arrogantly lose sight of the fact that they are ultimately responsible and accountable to the people.

The French Nobel Prize winning Author and Philosopher Albert Camus had rightly said “A man without ethics is a wild beast loosed upon this world”. In Goa we should leave no room for such beasts elected and masquerading as leaders of their flock when in reality they are wolves in sheep’s clothing. 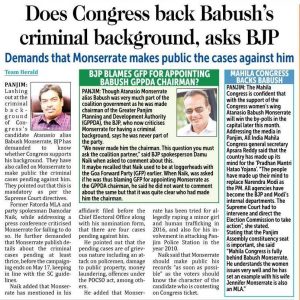