After having publicly vowed during the Panaji Assembly by-election held earlier this year that he would at any cost within 100 days of being elected remove all those Casinos from the River Mandovi, the now BJP’s enslaved MLA Babush Monseratte stands exposed.

With his very own government having now renewed those Casino licences, the test of the pudding would lie to see if Babush Monseratte keeps to his other promise that the CCP controlled by him would not renew the trade licences of those Casinos. 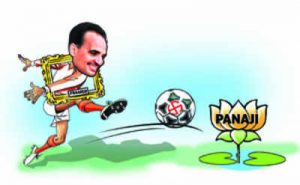 BABUSH MONSERATTE MUST HANG HIS HEAD IN SHAME – Aires Rodrigues