In yet another twist in this never ending Power play in Goa, axed Ministers Sudin Dhavlikar and Vijai Sardesai are set to make a comeback and will be inducted back into the Goa Cabinet. In this never ending political circus Goa has become a laboratory for every possible political experiment.

The Anti-defection law came into force in 1985 to deter the evil of political defections by legislators motivated by the lure of office and monetary gains. The intent of the law was to prevent corruption by way of horse-trading. Our Goa may be India’s smallest State but it has been in the news for all the wrong reasons. We have shown the nation ways and means to circumvent the Anti- Defection law, with political prostitution and party turncoats at its very hilt.

Today Politics is no longer a mission, not even an honest profession. It has been reduced to a scoundrel’s last resort. It has become a ruthless business, with morals and ethics twisted beyond recognition, thrown to the winds or long buried deep in the slush of ignorance and thuggery. Politics is a vehicle to swiftly rise from Rags to Riches and a personal gamble rather than a calling or mission to serve the common good. Politics makes strange bedfellows and it is chronic political prostitution that Goa has been witnessing. Even those in the world’s oldest profession do it better.

There is no hope whatsoever that our polity and political turf will ever improve. It is only further deteriorating and awfully decaying by the day. The unacceptable antics and behaviour of some of our politicians in recent times has turned it into a despised profession and looked upon with disdain and held in low esteem by the very people that they are meant to serve.

A few years ago Supreme Court Judges B.N.Agarwal and G.S.Singhvi had observed that even God cannot save our country from such politicians. Amen 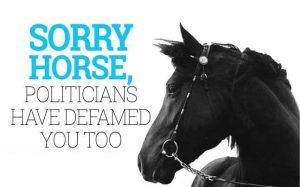