All this when just two months ago the BJP and Chief Minister Pramod Sawant had publicly stated that in view of Babush Monseratte’s serious criminal antecedents it was wrong for the then Town & Country Planning Minister Vijai Sardesai to have appointed Babush Monseratte as the Chairman of the GPPDA.

Mr. Chief Minister, what has changed in the last two months? It is now clear that Pramod Sawant is continuing Manohar Parrikar’s legacy of U-turns. Yet again the CM has proved to the public that his words are meaningless hot air and lack integrity and honesty and can never be relied on. It is a pity that the CM has despite the passage of time not learnt or put into practice the old motto MY WORD IS MY BOND that dates back to 1801. This is Gross Abuse of Power at best and at worst it is a betrayal of trust and duty that he owes to the people of Goa that he is accountable to.

The CM Pramod Sawant has gone one better to outdo Parrikar’s U Turns by corruptly carrying them out because he is on the wrong track and with selfish ulterior motives to keep a failing party and a discredited government afloat. 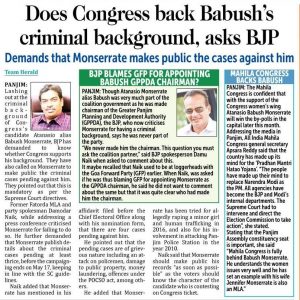