The much skewed and awfully distasteful uncalled for statement by the now ego puffed Revenue Minister Rohan Khaunte on government servants running side business after office hours is outrageous to say the least. It is cheap gesture politics to fool the gullible especially as MLAs and Ministers refuse to lead by example and who see their office as an investment rather than a public duty.

Punctuality and discipline during office hours has to be maintained and cannot be compromised, but if government staff and their families engage in petty honest business activity after office hours to earn a living simply to make ends meet as a result of high inflation caused by failed Government policy, it should not concern anyone, especially not these very corrupt and rogue Goa Ministers. MLAs and Ministers are all too often engaged in personal activities to amass wealth and property during their working day.

Before needlessly and viciously gunning for the government employees, the Revenue Minister Rohan Khaunte should take a long hard look in the mirror and he and his cabinet colleagues must lead by example and honestly tell us how they, their family and close connections have amassed so many hundreds of crores and real estate property grabbed in the last few years particularly ever since they deviously became Ministers in March 2017. Ministers must learn to point their finger at themselves instead of at others, to remove the log from their own eye before removing the speck from their victims’ eye.

It is pertinent to note that unlike the toiling Government servants, for the picnicking Goa Ministers everything is free and on the house from lavish accommodation to unlimited food and drinks besides the huge kickbacks they mercilessly pocket in kind and with those bags loaded with cash in their chosen currency.

Mr. Rohan Khaunte, the buck stops at your door although you like other Ministers prefer the Rupees stopping at your door. The wealth that you and your cabinet colleagues have illegally amassed is mind boggling and will soon bear the wrath of Goa’s Patron St Francis Xavier, just like one of your now distressed former Minister. Nothing more needs to be said Rohan, as you were his partner in Crime even before you became a Minister. The Almighty God is vigilantly watching even while your politically controlled and motivated law enforcers have conveniently chosen to turn a Nelson’s eye. You and other Ministers will also bear the wrath of the very people you seek to victimize as you are all accountable to the people of Goa. 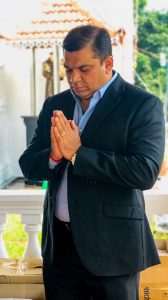