It is very outrageous and despicable that the lackluster Pramod Sawant led government in Goa which  is struggling to even pay the staff their monthly salaries has decided to unnecessarily fly at tax payers’expense a huge entourage including the entire jumbo cabinet to Delhi for attending the swearing in ceremony of Prime Minister Narendra Modi.

This cash strapped Goa Government which is borrowing galore to tide up its expenditure, needs to ensure that every paisa from the State exchequer is very judiciously spent. It is particularly appalling when expenses are incurred on non-priority areas. It is an irony that the State cries over lack of funds while at the same time we see very unjustified expenditure. For rationalization in government spending, strong and sincere austerity measures need to be taken with criminal waste of public funds on superfluous expenditure strictly prohibited.

Fiscal accountability and responsibility has to be an ongoing sustained process. Due to the repeated follies of the government we have landed in this current fiscal upheaval. Now it is the bounden and the lawful responsibility of the authorities to work towards restoring Goa back on the road to economic prosperity. Financial discipline and monetary answerability is a must if Goa is to move on. 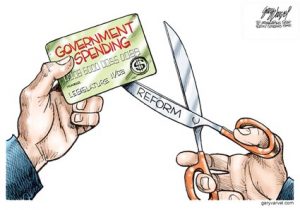