That cock and bull story by the beleaguered Panaji BJP candidate Sidharth Kuncalienkar that a bottle was flung at his car is a fabricated and stage managed fairy-tale to desperately seek some public sympathy. But the voters of Panaji are no fools and they know well the devious tactics of the Rags to Riches Sidharth Kuncalienkar who has amassed crores over the last few years by his misdeeds and acts of rampant corruption.

What is surprising is that the Police who acting as slaves of the BJP could not see through that concocted gimmick of Sidharth Kuncalienkar. As mandated by the Supreme Court through various Judgments, the onus is on the Chief Secretary and the Director General of Police to ensure that the police force is totally insulated from political machinations whatsoever.

The very angered voters of Panaji have decided to defeat the very corrupt and extremely arrogant Sidharth Kuncalienkar who now in utter desperation has even gone to the utter low extent of asking the people to vote for him as a tribute to the late Manohar Parrikar.

The BJP under the guise of carrying forward Manohar Parrikar’s legacy had propped up his son Utpal as the candidate for Panaji but as expected dropped him like a hot potato at the instance of Pramod Sawant and Sidharth Kuncalienkar.

Now even the very infuriated and outraged family members of Manohar Parrikar will on May 19th all vote for Subhash Velingkar.

While the Panaji Smart City scam rogue Sidharth Kuncalienkar’s crushing defeat in Panaji is inevitable and will come as no surprise, the days of Chief Minister Pramod Sawant alias Mr. Property Sawant are also numbered.

So when the Votes of the Panaji by-election are counted on May 23rd, late Manohar Parrikar’s soul deep within would be the first to rejoice that his dear mentor Subhash Velingkar will now be the city’s MLA who will successfully clear the mess left behind by the former Chief Minister. 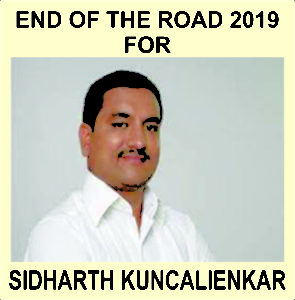