In Goa for these Parliamentary elections the battle is between a spirited Congress and an arrogant untrustworthy BJP which is empowered with huge money besides muscle Power. It is good that Goans have finally realized that the AAP candidates have been funded and fielded by the BJP to split the anti-BJP votes. The BJP’s devious plan has been foiled as the BJP-APP secret nexus has been exposed and must be rejected by the people.

For the Lok Sabha, let us elect Congress candidate Girish Chodankar in the North and Francisco Sardinha in the South with their symbol being the HAND.

In Mapusa, the tried and tested dedicated community service veteran Sudhir Kandolkar of the Congress Party must be our only much deserved choice with his symbol being the HAND.

At Mandrem and Shiroda we should go all out to politically thrash and castrate those defectors Dayanand Sopte and Subhash Shirodkar for having betrayed the trust of the people for the sake of Power and Moolah. The need and urgency to reject this despicable form of corruption and abuse of power has never been greater.

These elections are very crucial as it would enable us to restore democratic values and the sanctity of our constitutional authorities which over the last five years has been ruptured and corroded by the very autocratic and nepotic BJP lead by Narendra Modi in conjunction with his side-kick Amit Shah. A very resilient India shall overcome these troubled times by making their precious votes count and by voting Congress. Jai ho

People have suffered and must TODAY the 23 April take heed of the wise words of the late President Kennedy, and no longer Ask what Goa and India can do for them but DO what they must for themselves by making their vote count and electing CONGRESS candidates who will empower the weak, the marginalized and the exploited. This is the only way for people to rescue and save Goa, India, and more importantly themselves!

Remember in a democracy, Elections belong to the people and it is only your decision that can decide the outcome! So, Vote wisely, Vote CONGRESS. 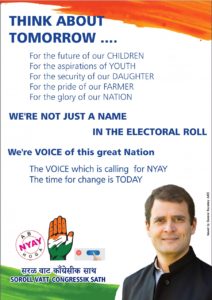 VOTING FOR THE CONGRESS IS THE ONLY WAY FORWARD – Aires Rodrigues