The RSS indoctrinated Pramod Sawant has started his innings as the Chief Minister of Goa on the wrong foot by needlessly appointing two Deputy Chief Ministers for India’s smallest State. It is very deplorable as it has been done for sheer for political expediency and appeasement.

Our first Chief Minister Dayanand Banodkar and his successor Shashikala Kakodkar too had so ably managed Goa besides Daman & Diu with just three Ministers. And in those days there were no Government Corporations to be doled out to pacify disgruntled MLAs. Ironically today some Ministers are also heading plumb Corporations of their choice.

Goa has been a laboratory for political experiments and we need no further evidence that Politics today is no longer a mission, not even an honest profession. It has been abridged to a scoundrel’s last resort. It has become a ruthless business, with morals and ethics twisted, thrown to the winds, and long buried deep in the slush of ignorance and thuggery. Those belonging to a genre of politicians with qualities of head and heart cannot survive in today’s political arena. It is only for those who are thick skinned and hypocrites to the core, always ready to breach and bend any and every rule to survive. 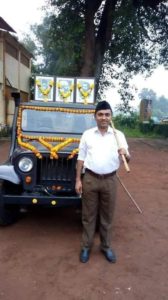