The Imagine Panaji Smart City Development Limited (IPSCDL) on 3rd September last year had a meeting with the residents of Ribandar who were categorically assured that another meeting would be organized where the residents would be given complete details of what was being planned and that no works would commence unless the locals were taken into confidence.

But suddenly this week the (IPSCDL) started a chaotic digging  of the roads in Ribandar which has been now stopped due to the prompt intervention of the Chief Secretary Mr. Parimal Rai and the North Goa Collector Mr. Levinson Martins.

The Imagine Panaji Smart City Development Limited is being craftily used as yet another vehicle by the BJP to hurriedly loot and plunder under the guise of making Panaji a Smart City. All their shabby works already done so far are on public display.

Not a single Goan architect or planner has been taken on board. The only Goan on that eight member sham Board of Directors is Sidharth Kuncalienkar, the crafty collection agent of Manohar Parrikar for whom this is yet another opportunity to further line up his already overflowing pockets. On what criteria was he appointed as Director despite he having no knowledge whatsoever of architecture or city planning?

Although Panaji and Goa at large having such brilliant expertise in the field, this government which claims to be for Goem, Goenkar and Goenkarponn has also appointed their conman and smooth operator Swayandipta Pal Chaudhuri as the Managing Director so that all their evil plans can be swiftly executed. Time to wind up this very devious Imagine Panaji Smart City Development Limited and stop this massive criminal waste of public funds. 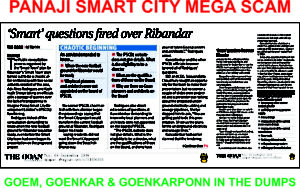