Close on the heels of the demise of former Deputy Speaker Vishnu Surya Wagh, another BJP’s very hurt loyal soldier, the Mapusa MLA and former Deputy Chief Minister Adv. Francis D’Souza has passed away. Goa has lost a thorough gentleman politician that the late Francis always was.

Alike Vishnu Wagh, the BJP and Manohar Parrikar time and again humiliated the Mapusa MLA Francis D’Souza. Over the years Francis D’Souza was openly misused by the saffron brigade and consistently politically undermined, despite his over two decade long unflinching loyalty to the party.

On 24th September last year Chief Minister Manohar Parrikar back stabbed and axed a very loyal Francis D’Souza from the cabinet despite his long unflinching support to the party. Manohar Parrikar did not even show that minimum courtesy of informing Francis about his ouster.

Now in an attempt to hoodwink the people in view of the ensuing Lok Sabha elections and the Assembly bye-elections, Manohar Parrikar has declared State mourning and a holiday on Francis’s death. All this hypocrisy by Manohar Parrikar will fool no one after the Chief Minister having deviously politically butchered the longest serving altar boy in the saffron brigade.

The conduct of the BJP towards the minority only shows that they value them no more than toilet paper. Less said the better on how in October 2000 then BJP coalition Chief Minister Francisco Sardinha was dispatched on a voyage to see the Kangaroos in Australia and was here very unceremoniously and deviously unsaddled from the throne by the devious Manohar Parrikar.

Less said the better on how after having vowed to carry on Matanhy Saldanha’s legacy, Manohar Parrikar and the BJP have reneged on everything that Matanhy stood for. Even Alina Saldanha, despite being the lone lady MLA, was craftily kept out of the cabinet. The BJP’s deceitful agenda is now in the open and there for all to see. 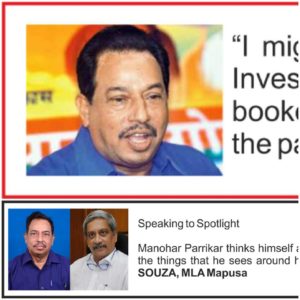