The best gift that the very ailing Chief Minister Manohar Parrikar can now offer the people of Goa is to gracefully tender his long overdue resignation and allow the State to move on. Goa cannot suffer any longer on account of his precarious state of health.

Now that health wise he is very incapacitated he should not continue as MLA of Panaji and Chief Minister of Goa. On account of his sheer hunger for power and rank arrogance he should be put to pasture. There is also abundant evidence that Manohar Parrikar has been very corrupt, communal and casteist.

In 2007 he had publicly vowed that it would be his last election. However in that greed and lust for power he went back on his own word and contested yet again in 2012 and became Chief Minister after promising the people of Goa a Parivartan by way of Good Governance and Zero Tolerance to Corruption. But given his string of swift U Turns, the people of Goa soon realised that by trusting him and electing the BJP they landed from the frying pan into the fire.

Panaji Constituency which now includes Ribandar sadly remains decaying and sinking despite Manohar Parrikar having been its MLA for over two long decades, thrice the Chief Minister and even being the Defence Minister of the country. With all that power at his hands he could do nothing for the State and even his constituency.

Incredibly, he had the cheek in 2017 to seek yet another term as MLA despite his grim performance or should we say non performance by falsely promising that in 365 days all the problems of Panaji would be resolved.

So at least for the sake of what remains of Goa, it is time for Manohar Parrikar to gracefully pack up and hang up his very soiled boots so that Goa which today has sadly become a gambling, prostitution, narcotics and crime destination may finally see some much needed Acche din. 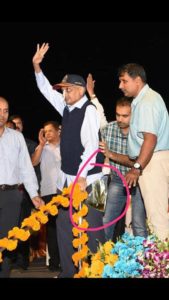