With the tacit support of Chief Minister Manohar Parrikar the social menace of Cainos is escalating by the day.  Other states have been smart enough to have kept them at bay, while only Goa has permitted both land casinos as well as offshore ones. And with political blessings they are operating unmonitored and unregulated with even the required Gaming Commissioner not in place.

While as the Leader of the Opposition Manohar Parrikar had vociferously branded Casinos as a “social evil” and had called them “dens of vice”. While spearheading that agitation against Casinos, Manohar Parrikar had vowed to make sure that all Casinos were thrown out of Goa if the BJP came to power. But in a dramatic U turn in March 2012 after usurping power, the BJP has gone all out to promote, shield and increase the number of Casinos in the name of promoting Tourism. Goa has been always a known tourist destination without being converted into a Las Vegas. Due to lack of vision and sheer greed of those in power, Goa’s Tourism industry is today in shambles and dire straits with quality and high-end Tourists keeping away from venturing in what was one’s the Paradise of the East.

Ironically the RSS which sets and gears the agenda for the BJP is known to be against gambling but their now silence on Casinos is deafening.  The BJP has fallen in passionate love with the Casino brigade who are now getting the government’s abundant patronage and overwhelming support. For the dismal number of jobs created for Goans by Casinos, the overall damage that is being inflicted to the State is irreversible. While the BJP is feasting and making merry with the abundant moolah flowing from the Casinos, Goa has sadly become the country’s gambling hub with the allied vices of Prostitution and the Narcotics trade also flourishing by the day while the Crime rate is on a steep rise. So, for Goa to remain afloat the Casinos must sink. And faster it happens it would be better for Goa and Goans. 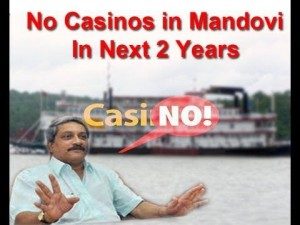